skip to main | skip to sidebar

Summer's Tough Lesson: We Are Resilient

"Life is a succession of lessons which must be lived to be understood." Ralph Waldo Emerson

The slender, tall Jeffrey by our deck is weeping. The summer has been a difficult one for our forest. We're suffering through another drought. The lake is low; once bubbling streams have slowed to trickles; and as the bark beetles attack the Jeffries and Ponderosas, to fight them off, they weep long strands of sap that glisten in the sun like a shiny trail of tears.

One way or another, it's been an unusually difficult summer in most regions. Not only has there been drought, but also floods, fires, hurricanes, and tornadoes. Nature's ways have been creating woes for flora, fauna and humans alike. And we've suffered a fair share of man made woes as well. Sky high gas prices, failing banks, foreclosures and bankruptcies hitting new highs, inflation, pink slips, and growing debts have left so many of us from young families to solitary seniors and mom and pop stores to big lenders and automakers hanging on by their fingertips.
But our forest is resilient. The massive Ponderosas stand stalwart on this land as they have for hundreds upon hundreds of years. The rocky creek beds still carve their path through the land as they have through time. Newborn Jeffries still abound, dwarfed beneath their parents, their tiny branched reaching for the sun, bending if need be to reach its rays.

On days when the news headlines strike fear in the heart, I take comfort in the lessons of these trees, this forest. They remind me that, like them, we are resilient too. We are descendants of survivors ... are we not? Or have we become spoiled and weakened by the oversolicitude and overindulgence during recent times of seeming national prosperity?

Resilience: the capacity to hold together, absorb disruptive shocks, and maintain one's ability to continue functioning in the face of change.

When a tree is felled, the history of its resilience is visible in the rings of its trunk . The thick rings reflect its growth in favorable climates with abundant rainfall and good growing conditions. The thin rings show its response to poor growing conditions, lack of rain, or the presence of natural disasters such as droughts, floods, volcanoes, even fires.

Our resilience, of course, is not so obvious to the eye. But it is visible in our eyes. Do we wilt? Are we agog, so blinded by favorable times that we ignore what we don't want to see? Or do we, like the trees, respond with determined effort, hunker down, contract our ways, curtail the bubbly so to speak, and savor the trickles that remain?

Too often the choices we make seem to rest on a trick our mind plays with us. A trick called prediction. If we predict a positive future, we tend to be optimistic in the present and behave as if we need not change or can direct change to our favor. If we predict a difficult future, we tend to be pessimistic about the present and try to prevent or avoid the need to change if at all possible.

This forest that is my home knows of neither optimism nor pessimism. It knows not if there will be rain this fall or a heavy snow pack next spring. We don't know either, but we like to think we can. We undertake all sorts of efforts to predict what is to come, even if we have to make it up with a dose of "positive thinking," instead of responding to what is here and now before us.

To be like the forest is to avoid this mind game of ours and throw our selves fully into life that is, contracting when we need to contract, expanding when we can do so without harm.

To be like the forest is to endure. To ignore its lessons is perish.

Blessings of a tough summer,
Sarah Edwards
Posted by Sarah Anne Edwards at 9:03 AM 1 comment:

I am an ecopsychologist and author of the novel Sitting with the Enemy and Middle-Class Lifeboat, Careers and Life Choices for Navigating a Changing Economy. I live in the Los Padres National Forest where I am Director of the Pine Mountain Institute

Past issues of Nature's Wisdom from 2002-2007 are available at http://www.pinemountaininstitute.com/

this is a place holder


this is a place holder 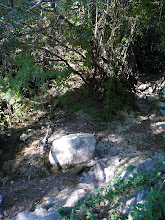 The Stream Is a Trickle 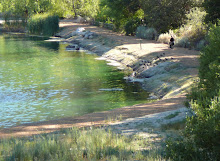 The Lake Is Low